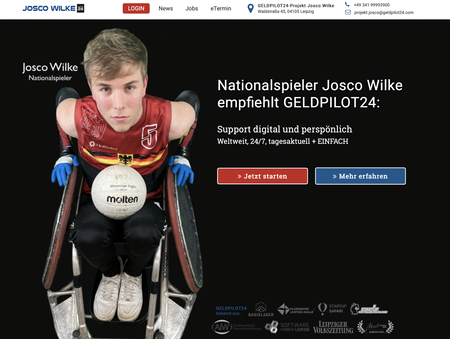 National player with mission to customers

National player Josco Wilke is an enthusiastic user and now also an official brand ambassador of GELDPILOT24. We support Josco Wilke on his way. As a handicap athlete, he does not have it as easy as normal athletes to go his way.

Josco talks openly about his sudden illness, which took him from being a "normal" student to living with severe limitations in a short period of time. If you start your free GELDPILOT24- account through Josco eStore, you will support Josco Wilkes sponsorship through us at no extra cost to you. Josco.Wilke.geldpilot24.com

We are enthusiastic fans of Josco Wilke as a person, his mindset, charisma and his enthusiasm for the ideas of GELDPILOT24.

We do not only want to support national player Josco Wilke as a sponsor, but also indirectly with it the German wheelchair rugby national team. Instead of investing in expensive advertising models, we basically invest in clubs, athletes and influencers with a social approach. In doing so, we measure the reach of the respective sponsorship and thus assess the amount of our respective sponsorship, depending on the respective success.

With their decision to take advantage of GELDPILOT24, customers also have the opportunity to choose from various projects one that we promote without additional costs from our own funds. If none of our projects appeals to the customer, he can make us his own suggestions about him inspiring associations, projects or influencers.  (m/f/d)

For own suggestions write us here. geldpilot24.com/kontakt