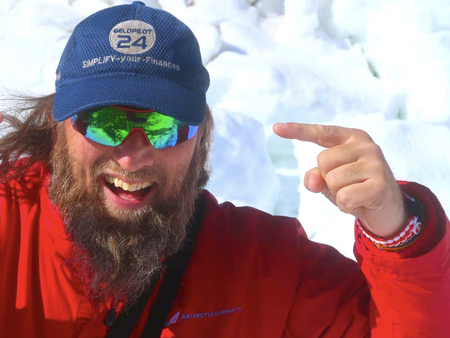 Robby Clemens and GELDPILOT24 in Antarctica

23,000 kilometers from the North Pole to the "South Pole" on foot

Twenty long months from Leipzig to the North Pole and then on foot to Antarctica. Congratulations to Robby Clemens. Leipzig, city of records. Not only the most newly built Porsche come from Leipzig, a nationwide financial startup, but also Robby Clemens who ran together with GELDPILOT24 from North Pole to South Pole.

On his tour Robby tested the use of his GELDPILOT24 account again and again as an enthusiastic user, sportsman and record runner. By the way, Robby first became a GELDPILOT24 user on his tour in America. Now our stores in Germany are looking forward to meet him in Austria and the USA. We will continue to accompany Robby Clemens as a sponsor. In the context of our project GELDPILOT24.club this is also a good opportunity for the clubs sponsored by us to network. We have now tested GELDPILOT24 on all continents and climate zones. Result: It works EASY everywhere.