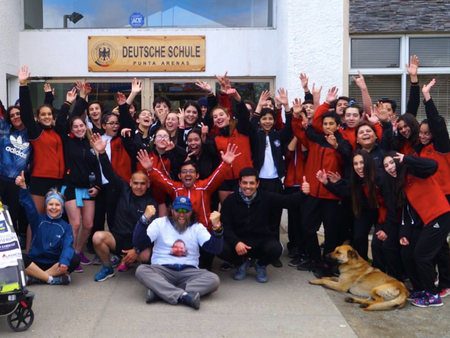 We have been accompanying Robby Clemens on his way from the North Pole to the South Pole on foot since 2017. As a startup we accompany Robby also because he is not this styled extreme sport type, but also visits country, youth, schools and gets involved with the people. We have been supporting Robby on his way to the North Pole as part of our sponsorship for many months. But that will not be enough. Robby has therefore launched a campaign with the Visionbakery project platform. There you can support Robby's last stage from 10 € with just a few clicks.

This campaign has started very well in the meantime. You will automatically receive an exclusive quid pro quo from Robby for your support. Additionally we will raffle ten signed and limited North Pole South Pole Caps among the supporters. Robby visited an incredible number of schools on his expedition and promoted sport, movement and optimism. For us, this is the core of his entire expedition. Supports him on his last leg to the South Pole. Click, set your amount and you're done. You can donate anonymously or appear in the list as a supporter.